The Independent National Electoral Commission (INEC) has disgraced one Prof. Sule Bello who approached the commission’s headquarters in Abuja and introduced himself as the interim National Chairman of the Peoples Redemption Party (PRP).

The INEC management finally informed Sule Bello that the commission is a serious institution that does not entertain frivolity or stupidity from anybody. It affirmed that Alhaji Falalu Bello remains the National Chairman of the party considering the fact that the commission did not receive any communication from the PRP that indicated a change of leadership in the party.

Our correspondent gathered that the INEC management had warned Sule Bello to stop parading himself as the National Chairman of the PRP henceforth.

Angry with the questions asked by the INEC management and unsavoury treatment received from them, Sule Bello stormed out of the INEC headquarters in a very sad mood.

Sule Bello, who went to the Commission in company of one lanky anonymous person, has been parading himself as the interim National Chairman of the PRP despite several warnings from relevant authorities and persons admonishing him to desist from such act as it is tantamount to a criminal impersonation, a crime that may land him in jail.

A further check by our correspondent on the INEC website had shown that Alhaji Falalu Bello, OFR is still the National Chairman of the PRP while Mr. Babatunde Alli is the National Secretary of the party.

Alhaji Falalu Bello has become the National Chairman of the PRP in September, 2018, following the step down of late Malam Balarabe Musa from the position. 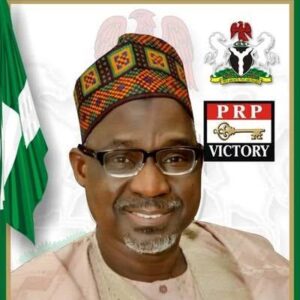 Prior to his ascension to the position of PRP National Chairman, Alhaji Falalu Bello was once the Managing Director/CEO of Unity Bank Plc.

Alhaji Falalu Bello holds the National honour of the Officer of the Federal Republic (OFR) and the traditional title of Danmasanin Zazzau.

The Peoples Redemption Party (PRP) has expressed its readiness and determination to defeat other political parties in the Anambra State Governorship election slated for November 6, 2021.

The Anambra State Chairman of the party, Hon. Mathias N. Aninwachukwu, in a press statement made available on Sunday, disclosed that the prospect of the party was high and bright considering the fact that their candidate, Dr. Nnamdi Nwawuo had been duly screened and given a clean bill of health by the Independent National Electoral Commission (INEC) last Friday.

Part of the statement reads; “in spite of the fact that this is the first time PRP is contesting gubernatorial election in Anambra State, the clean bill of health received by our candidate from INEC had indisputably shown that our candidate will participate in the November governorship poll and it is an indication that our party has the strength to win the election overwhelmingly.

“The above development has also exposed and terminated the activities of some imposters who are desperate to embarrass and tarnish the reputable name of our great party, the Peoples Redemption Party (PRP).

“As the oldest surviving political party in Nigeria, PRP has good policies and programs for the Ndi Anambra with job creation, agriculture, industrialization, transformation of health sector, provision of basic and functional education as primary priorities.

“Finally, we use this medium to encourage our party members and supporters across Anambra State to continue working diligently, harmoniously and peacefully so as to ensure the party reach its deserved destination which is victory,” the statement revealed.

The Benin Zonal Office of the Economic and Financial Crimes, EFCC, on Monday July 12, 2021 secured the convictions of two internet fraudsters before Justice Efe Ikponmwonba of the Edo State High Court, Benin City.

The convicts, Ehigiator Emma Kennedy and Idoko Enape Onakpa were arraigned on separate one count charge of personation contrary to and punishable under section 484 of the Criminal Code Cap 48 Laws of Bendel State of Nigeria (as applicable in Edo State) 1976 and punishable under the same section.

The charge against Onakpa reads: “that you Idoko Enape Onakpa (alias Mathew Lawrence) between 7th September, 2012 to 9th October, 2012, within the jurisdiction of this Honourable Court did with intent to defraud one Harvath Alexanda and Anete Losberga (white ladies) of their hard earn money, falsely represented yourself to be a citizen of the United States of America but living in UK by sending fraudulent/scammed mails and pictures on your Yahoo mail account Mathewlawrence89yahoo.com to them through the internet which pictures and identity you claim to be yourself and thereby committed an offence“.

The defendants pleaded guilty to the respective charge.

In view of their plea, the prosecution counsel, Isa .K. Agwai prayed the court to convict and sentence the defendants accordingly.