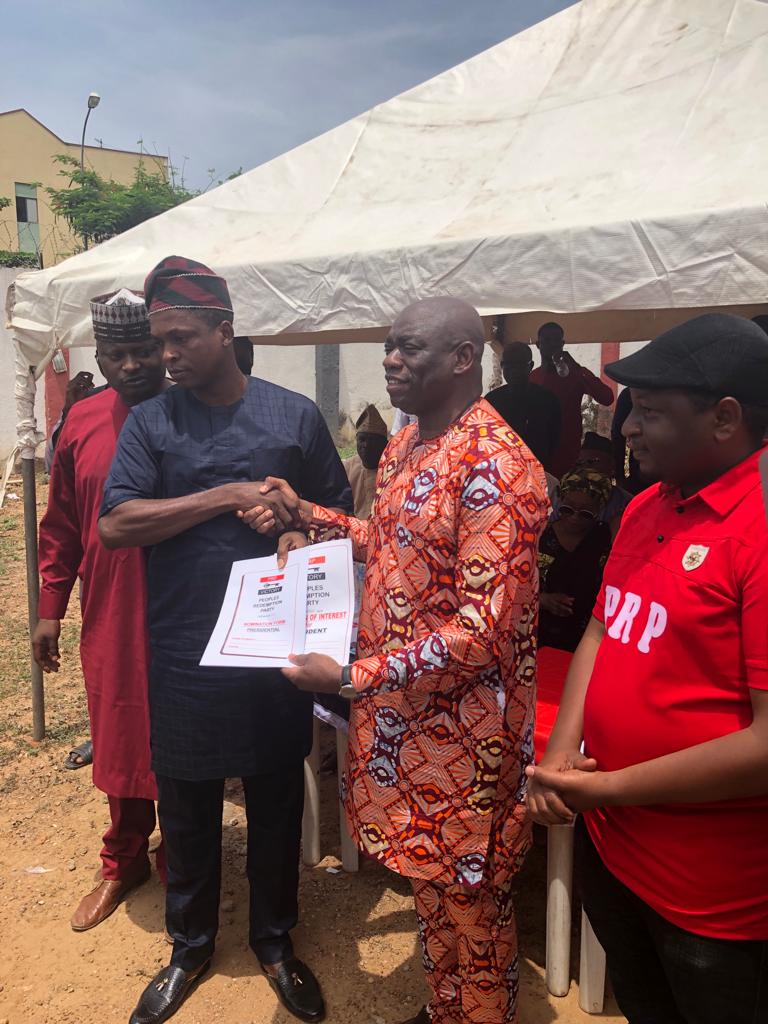 He received the forms from the National Secretary of the Party, Babatunde Alli, at the PRP’s headquarters in Abuja.

Three aspirants have so far purchased the forms for the presidential ticket of the party. They are Retired Col. Gboluga Mosugu, Mrs Patience Key and Kola Abiola.

Abiola, who kicked against consensus candidacy as contained in the Electoral Act 2022, said that other aspirants of the party, who had so far purchased their forms were also opposed to the method.

He said: “We have two other candidates. We believe in internal party democracy, we are not doing consensus. It is a transparent party, the more candidates we have the better.

“Whoever wins, we will all come together and work for the party and not somebody calling for consensus where someone will step down for another.

“Let’s go and have a competitive environment, it will be transparent and we will uphold internal democracy and be able to have proper democracy.”

Earlier, the party’s national secretary, Alli, said the party had strategised to ensure a rancour-free primary, by allowing delegates to vote for the presidential candidates of their choice at the state levels.

Meanwhile, the PRP has extended sale and return of nomination forms till May 18.

A retired Army Colonel and member of the Peoples Redemption Party, Gboluga Mosugu, has submitted his Expression of Interest and Nomination forms making him eligible to run for the office of the President under the platform of the party.

Mosugu who spoke to pressmen while submitting his forms at the PRP’s National Secretariat in Abuja on Wednesday, said he took the idea to lead the country very seriously.

He said, “The idea to lead Nigeria right is one that I take seriously. I am aware of the challenges ahead, but challenges are meant to be faced and conquered, and I’m in it for the long run. I am a retired Colonel, and as a soldier, one is always prepared to die for their country if the need arises in the course of duty. I could die for Nigeria.

“After I got the Expression of Interest and Nomination Forms, I could have changed my mind that I didn’t want to go further, but I am prepared for the challenge ahead, and there is no fear in my mind.”

Mr Mosugu described the PRP as the most competent party in the country, calling on Nigerians to give their mandate to it in 2023.

Speaking, a retired major general, Anthony Ajemba, said he had known Mr Mosugu for over 50 years. “We met in 1973 as young-boy soldiers at Nigeria Military School, Zaria.”

He described the aspirant as a detribalised Nigerian, saying that if given the opportunity, Mr Mosugu would take the country to greater heights.

“We have come to give him our support. He can deliver this nation. This journey that he has started, by the grace of God, he will end well,” Mr Ajemba said.

The national secretary of the party said the PRP had maintained its ideology as a people-centred party and a movement to defend the defenceless.

Mr Mosugu will have to contend for the PRP presidential ticket with some other aspirants including Kola Abiola son of the presumed winner of the June 12, 1993, Moshood Abiola, and Patience Key.

The Peoples Redemption Party ,PRP, has expressed gratitude and respect to all Nigerian workers on the occasion of this year’s Labour Day.

A statement Signed by the National Chairman of the party, Alhaji Falalu Bello, says the party hold workers in high regards in view of the fact that they are a nation’s essential backbone.

“it is only because of workers that the nation can survive and prosper” Alhaji Bello added.

According to the statement Nigerian workers deserve to be appreciated and celebrated for giving their best despite the unfavourable working conditions and bad governance.

The party uses this important occasion to extend a hand of partnership with Nigerian workers so as to salvage Nigeria from the challenges bedeviling the nation.

Buhari: A General That Takes His Nation to Waterloo! By Comrade Bello Ishaq